Yesterday my girlfriend Crystal and I had an impromptu movie marathon. She picked a movie she’d been wanting to see for a while and I obliged, then I picked a movie and she obliged. After these first two movies we noticed that the movies were 10 years apart from one another (her pick was from 2005, then mine was from 1995). We decided it was her turn to pick and that it should be a movie from 1985 and we’d close it out with a movie of my choosing from 1975. And that was our Saturday, read on to find out our picks and my thoughts on our choices…

Crystal likes this movie and had been wanting to rewatch it ever since we saw the plane crash set at Universal Studios about a year ago. I don’t like this movie and managed to put it off. Alas, the movie was free on demand and my luck had run out. Her opinion of the movie didn’t change and neither did mine. It has its moments, both Tom Cruise and Dakota Fanning give great performances, but it is a weak effort on Spielberg’s part and not original at all. The movie screeches to a halt when Tim Robbins joins the gang adding an unnecessary detour that’s really confusing. It seems like they’re stuck in a basement with Tim Robbins for days but I think it’s just one night? I’m not sure and don’t really care. I’ll just move on before I start ranting about the silly ending.

Hey, speaking of silly, have you watched “Congo”? You need to watch “Congo”. Cashing in on the Michael Crichton/”Jurassic Park” craze of the 90’s, this movie has action, adventure, and romance between a man and his talking gorilla. Not only does this gorilla talk but she smokes and drinks martinis. I had been wanting to watch this movie since the summer time, it just popped in my head because I’ve never revisited it since it came out.  I think I liked it as a kid but I could be wrong, I remember the theater being packed and being a little scared of it. Since it was on Netflix instant and I recently listened to this, it was my immediate pick after “War of the Worlds”, if only out of spite.  I was in no way surprised by how bad it was and it was kind of stupid fun, my girlfriend agreed that it was pretty stupid and that’s exactly how she remembered it. 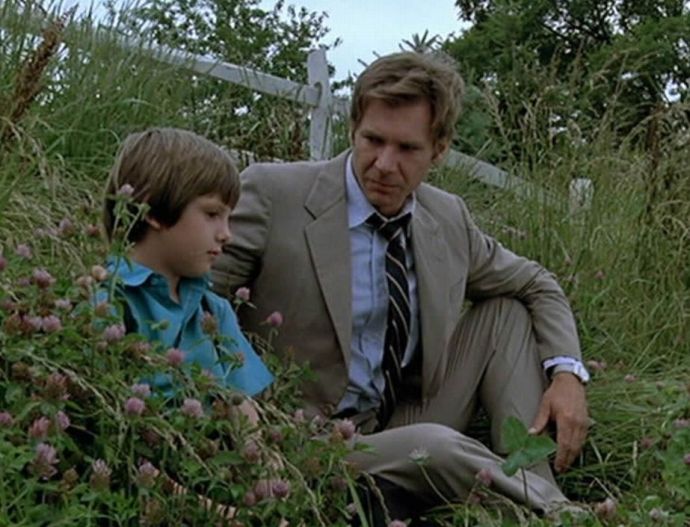 Once we realized our inadvertent connection of a decade of separation choosing a movie from 1985 proved difficult. 1985 was a pretty good year for movies and I’d be hard pressed to choose. Luckily that choice wasn’t up to me. My girlfriend had seen “Witness” before but didn’t remember it very well, I had never seen it but have always been interested. I love Harrison Ford and the movie has always made me curious. It is an acclaimed movie, very well-regarded, so I was expecting something amazing. I was not disappointed but it definitely not what I was expecting. I thought it was going to be a heady drama instead of the more straight-forward quasi-thriller that it ended up being. I enjoyed it and would recommend it but I hope I’m not alone in thinking that “Witness” is a few degrees off from being a full-on comedy which is probably why I liked it, Crystal agreed.

The second the decades pattern was established, I knew what my pick was for 1975 immediately. I didn’t have to look up movies from 1975, I knew when “Jaws” was released and knew that was what we were going to watch. Crystal had never seen it before and I’ve been wanting to revisit it for many years. I probably haven’t watched it fully since childhood but I did watch many times in those years. It was a favorite of mine and a movie that got regular play, especially during the summer months. One summer as kids, our family watched a new “Jaws” movie every night. All the sequels are pretty bad but “Jaws IV: The Revenge” is a new kind of terrible, as a family that was probably our favorite because of the fun we had making fun of it. The original holds up amazingly, there’s a reason it’s still one of Spielberg’s best films and why we have “Summer Movie Season”. Crystal was just very pleased, enjoying the movie all the way, while Spielberg is partly to credit for this, Roy Scheider’s performance carries the movie in a way that the viewer feels that they’re in this mess with him the whole time. Recommended for “Shark Week”, summer time, or even Halloween.

And that was my Saturday.