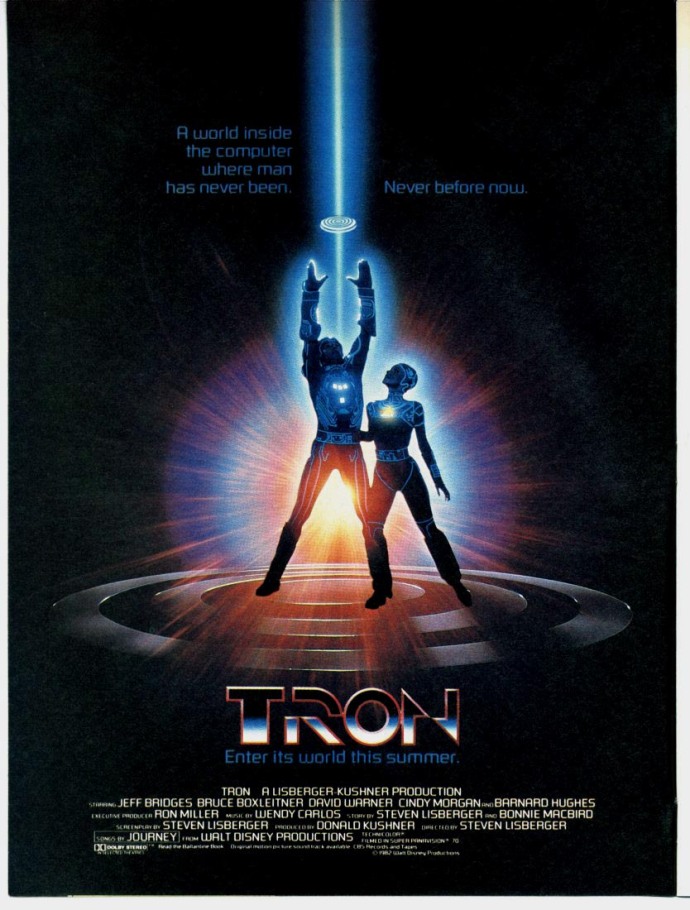 This week’s Disney Movie of the Week is one that I haven’t watched since the early 90’s. I don’t even remember what I thought of it, I vaguely remember thinking that it was boring. Is it still boring? Read on for my thoughts…

“Tron” has a very abrupt beginning, we’re thrust into the high stakes world of super slow computer hacking. Without any real exposition or explanation we’re shown what keyboard crunching in our world actual looks like in the system. Jeff Bridges’s avatar in the system “Clu” is looking for  a file while “Flynn”, Jeff Bridges in the real world, watches literally nothing on his screen except what he just typed. Somehow he knows that “Clu” is being chased and on the run. Don’t ask me how.

The movie takes a while to get into the meat of the story when “Flynn” himself actually enters the system. But when it does, boy does it maintain pretty much the same pace. You could tell the movie was ahead of its time in terms of computer knowledge but not by much. In some instances it feels like they’re making it up as they go along.

I enjoyed the effects and the action is kind of fun. I still can’t get over that clunky abrupt beginning, not too mention Bruce Boxleitner’s clunky performance. He’s easily the worst thing in the movie, his performance improves when he takes on the role of “Tron”, luckily most of the movie rests on the shoulders of Jeff Bridges.

Is it worth revisiting? Probably not, to be honest though I enjoyed it about as much as the recent sequel “Tron: Legacy” (2010). I feel both movies are almost there in terms of storytelling. They have the visuals, most of the performances, and even the action down but fall flat when the writing is concerned. I should also mention that as abrupt as the movie starts, the ending is almost “Sopranos” abrupt.